If you enjoy adventure quests with a bit of psychology and decadence, welcome to Sally Face! This strange guy always wears a mask that conceals his face. Besides, he has long blue hair that makes it difficult to guess at once whether he is a boy or a girl (you will find that out later). Right from the start, we don’t know anything about why he keeps his face covered (perhaps he got into an accident and had some kind of surgery?). But we can learn that by gradually following the events of Sally’s life disclosed through his memories with Larry Johnson.

According to the storyline, Sally and his father move from New Jersey to Knoxville, where they settle in a house with a dark history that suddenly burst into the young man’s life. The hero finds out that a brutal murder occurred in the house, and the idea to uncover the mystery behind this case seizes him headlong – he can no longer sit still and asks all neighbors about the incident, until, unexpectedly, he stumbles upon … a ghost. Yes, the plot is under a mystical background and in its intrigue can remind some works of Howard Phillips Lovecraft or Edgar Allan Poe. At the same time, you readily believe what is happening on the screen: despite the peculiar style of drawing, everything looks quite impressive and realistic.

The author plays very skillfully with the time aspect: moments from the present are cleverly interwoven with the actions of the past. The chronology of the events is told as if the main character was asked in detail about the smallest fragments of his life. The story itself captures a fairly large number of characters, each with his own history behind. And each of them is remembered, because the author manages to transfer all the inside ins and outs of the heroes at the expense of a few – and rather laconic – dialogues. Plunge into the thriving story of Sally and unravel the mystery of his face! 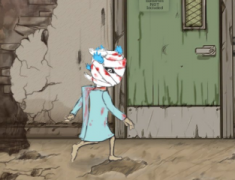 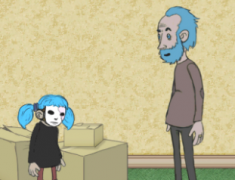 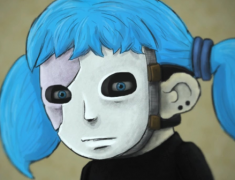